Are you a medieval fighter? Do you participate in SCA heavy-list? Are you wondering how to get your fighting to the next level? Maybe you struggle to land telling blows. Maybe you’ve developed an injury using sub-par techniques. Maybe you’ve been playing so long, you’re not sure how to keep going.Fortunately, this book has the answer to each of those situations, and countless others. Introducing: The Bellatrix System THE system for medieval armored combat.Condensing the better part of sixty years of martial arts and SCA armored combat experience, Duke Paul of Bellatrix has compiled his methods, techniques, and tactics into one place for every fighter to benefit from. His fighting system can be applied by ANYONE, regardless of height, weight, age, gender, physicality, or skill level.The techniques described in this book are applicable to all styles of armed combat, including:◆ The Society for Creative Anachronism◆ Historical European Martial Arts◆ Battle of the NationsWith decades of experience in martial arts and postural therapy, Duke Paul’s methods are safe for anyone of any body type or skill level to employ.His system, detailed in this book, is not only the most comprehensive system for armored combat available, countless experienced fighters across numerous sports agree, it is the best one. 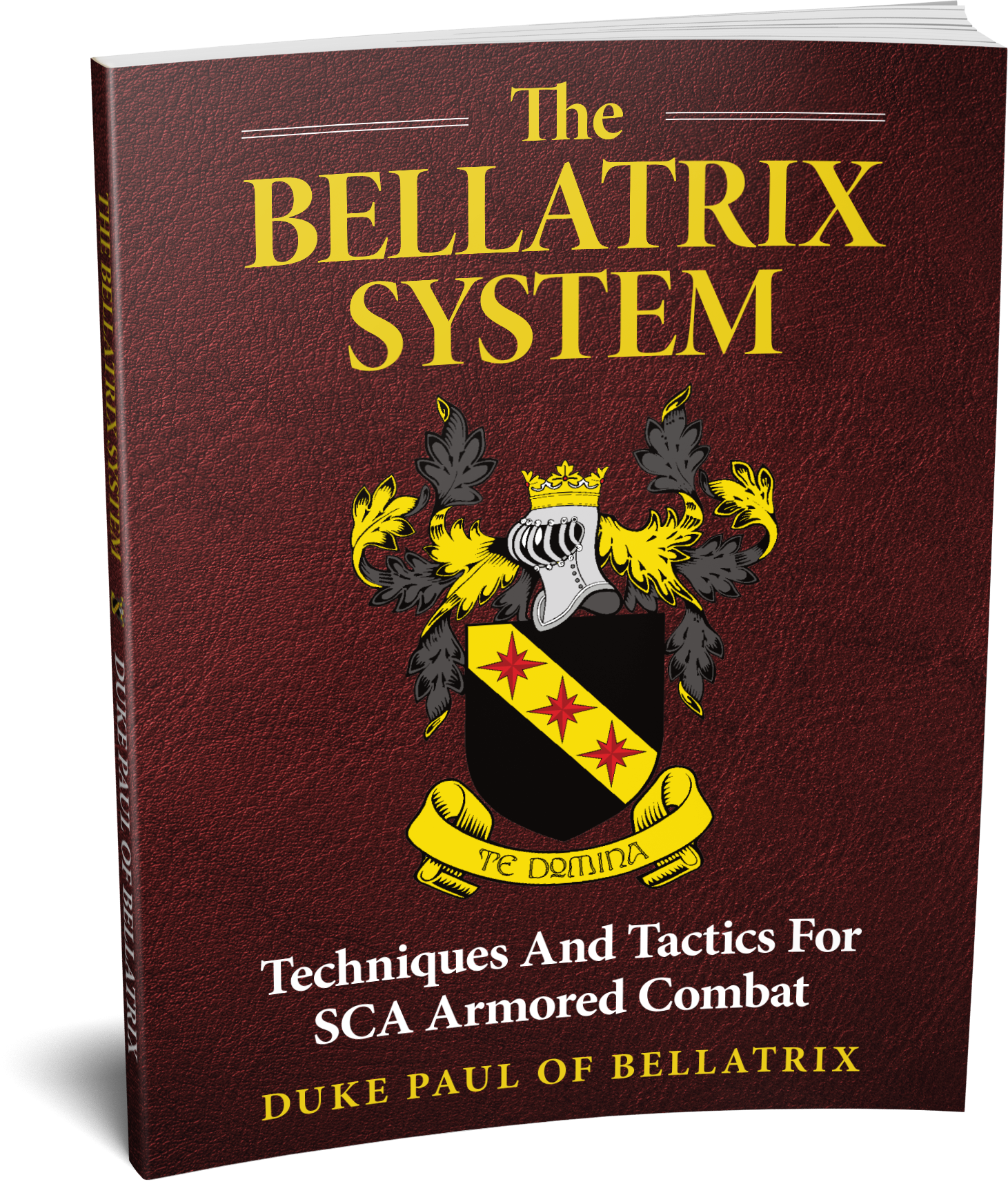 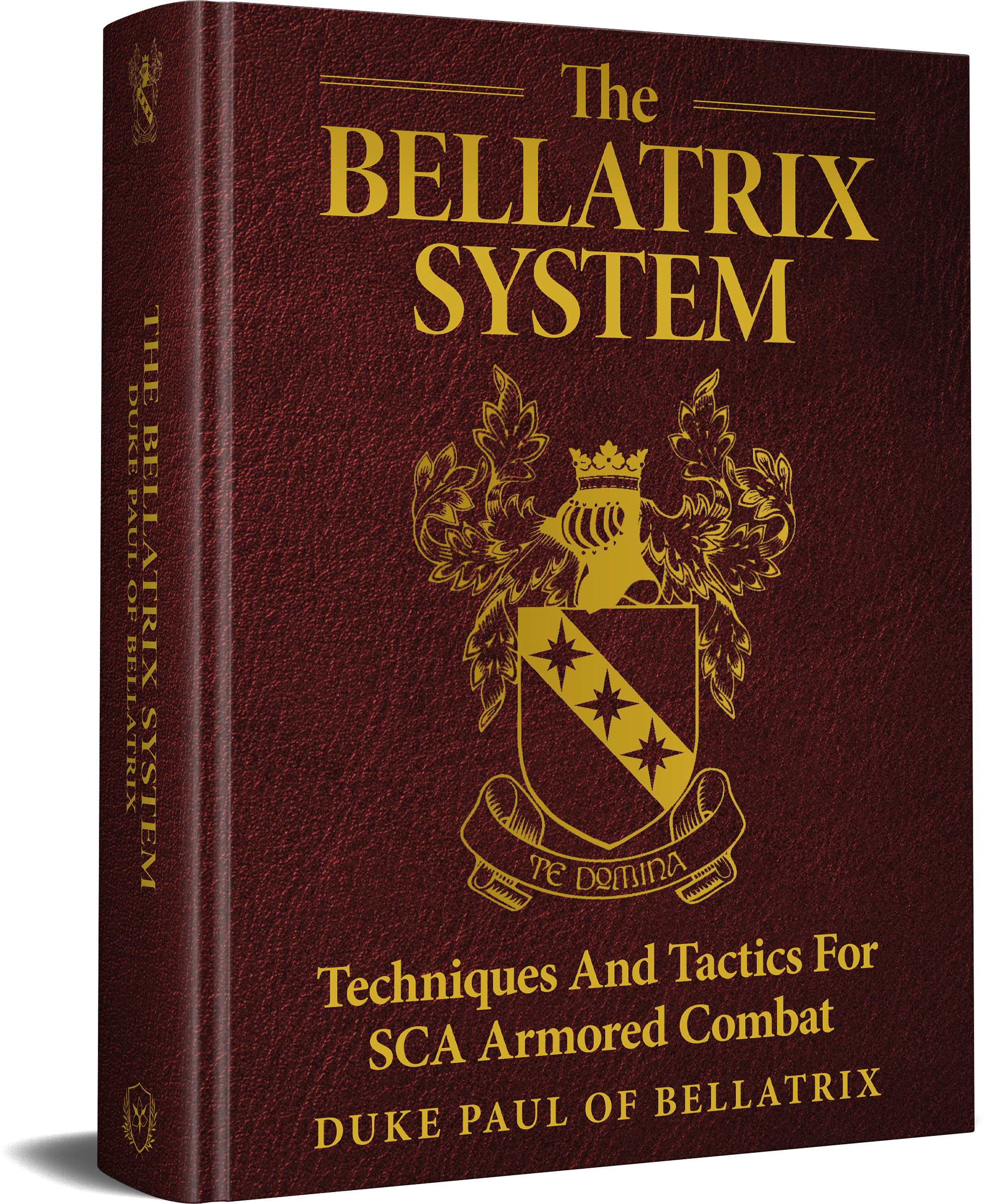 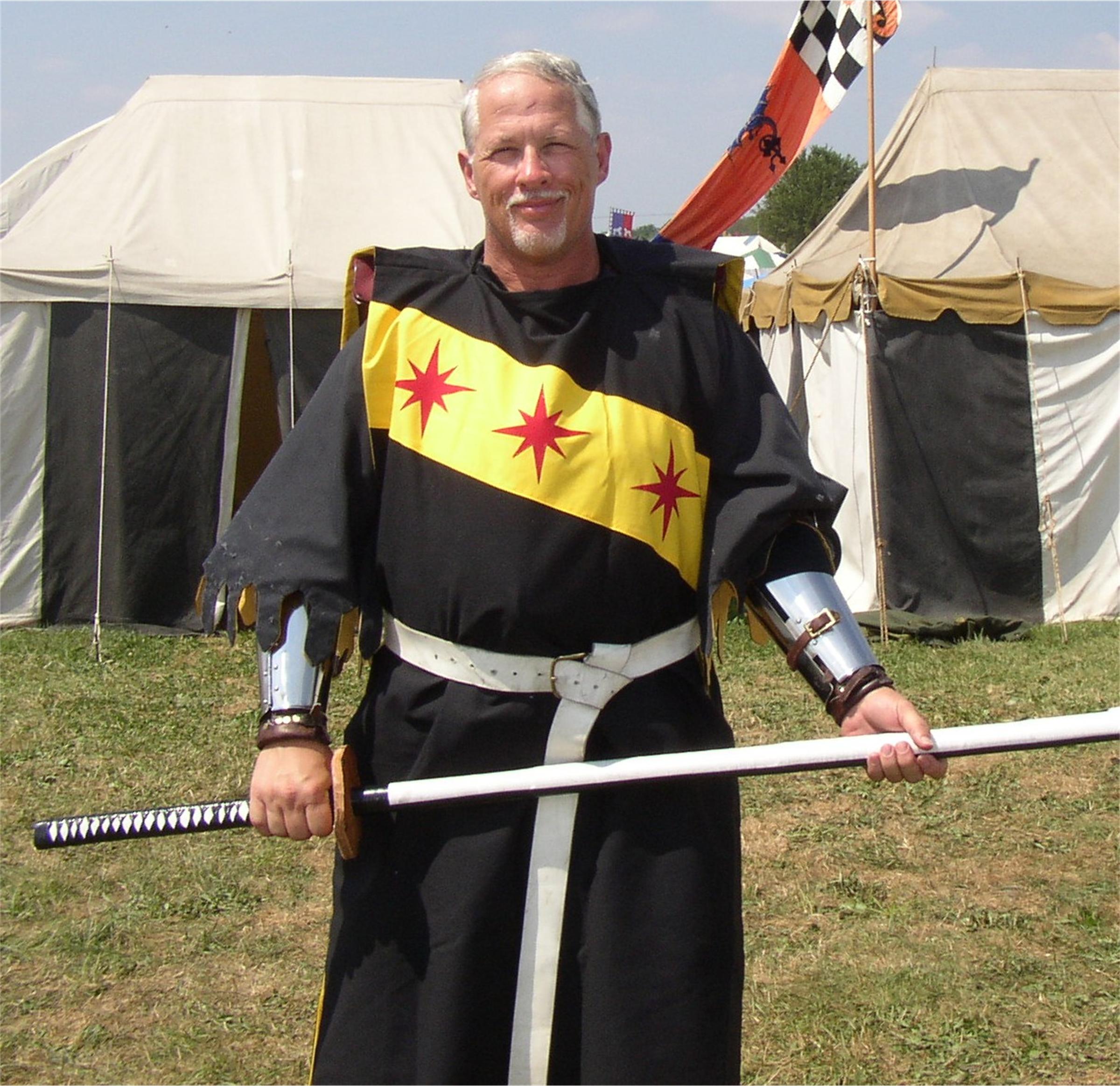 Duke Paul of Bellatrix — Paul Porter — has been practicing martial arts since the 1960s. Starting with Judo, Paul discovered a love for using physicality and leverage to hone his mind and body. In the 1970’s he discovered SCA heavy combat, and brought his already considerable knowledge of biomechanics to bear on rattan fighting.

Then began a journey which would span over 50 years, and continue to this day. In addition to 8 crown tourney victories, the reach of Paul’s expertise spans continents. He’s taught fighters of all genders, sizes, and skill levels in 28 states (including the District of Columbia), 3 Canadian provinces, and 5 countries.

In the SCA, alone, Paul has trained fighters in 19 of the 20 kingdoms. The reach of his fighting system is unmatched by any other used in this field.

Constantly refining his existing system and exploring the merits of new techniques, Paul’s contribution to armored martial arts continues to grow as he constantly reviews and modifies new fighting techniques.

No technique is incorporated into Paul’s system until it has been proven effective against even the most skilled combatants and is also biomechanically sound to perform.

Paul’s decades of experience with judo, along with his keen interest and study of postural alignment therapy have made him the ideal teacher for a martial art as varied and unique as SCA combat. With his guidance, participants learn techniques which will keep them safe, as well as improve their game.

Advance Praise For The Bellatrix System

William Stamm – Sir Havoc the Wild – Aethelmearc
I made it a point to attend one of Duke Paul’s classes at Pennsic war in 2015 after ‘meaning to’ for close to 20 years. The improvements I noticed after that single class convinced me to attend several more throughout the week, and completely evolved my body mechanics and fighting style. Where I once thought that I’m likely looking at the downhill side of my heavy fighting career, Paul Porter has shown me I have yet to see the apex. Thank you.

Arthur Donadio – Duke Cuan MacDaige – Atlantia
Paul’s work on speed and power generation revolutionized SCA combat. I’m excited that he has distilled 50 years of research and teaching into a manual for beginners and experts alike. You really can improve your fighting!

Dana Lucas – Duchess Signy Heri – Atlantia
Paul Porter understands the physics of combat, and can train anyone, of any size, to dynamically throw effective blows. I highly recommend learning from Duke Paul.

Hank Salvacion – Sir Tanaka Raiko – East
In every martial arts or combat sports movie, every fighter training montage has an instructor with a depth of knowledge and experience that makes them the best they can be. Yes, the fighter puts in the work, but the instructor gives them something that makes them incredible. In the SCA that’s Duke Paul.

Jeffrey Galli – Viscount Brand McClellan – West
It’s been over 20 years since I trained under Paul Porter. Since then I’ve won numerous National and International Championships. In live steel, full contact fighting, this was done in my late 40s and early 50s. These victories were not achieved through athleticism but through understanding Paul’s fundamentals in mechanics and a level of consciousness I only discovered through Paul‘s teachings. No accolade or medal will ever equal the value this has had in my life; as a teacher, coach and fighter. Over the last 20 years I’ve been continually amazed as the depth of Paul’s teaching has revealed itself to me. Paul’s understanding of mechanics and one’s center are indispensable for fighters in any of the martial arts.

Cathyn McKenna – Earl Cathyn Fitzgerald – West
Simply put, Paul revolutionized combat in the SCA, taking it from a back yard hobby, and turning it into a martial art. Directly or indirectly, the entire medieval combat community has been impacted by his work. We stand on the shoulders of giants, and none stands taller than Paul.

James T. Paxton – Duke Thorin Njalsson – An Tir
I have trained with, and learned from, Duke Paul since the 1970’s (over 40 years). He developed a true martial art that can be used by anyone, regardless of size or gender. He is a generous and brilliant teacher. I strongly recommend you study his methods, no matter your level of experience.

Joe Hopkins – Viscount Sagan von Osten See – Artemisia
I have known Paul Porter/Duke Bellatrix for more than 35 years, at one time being fortunate enough to be one of his students. Throughout the decades, I know Paul has dedicated a lot of time and effort to the training of others. It would probably not be possible, to identify all those who have benefited from his training, both directly and indirectly.
This book will be of value to experienced participants in SCA combat, and of immense value to less experienced and new participants in SCA combat.
Thank you, Paul, for creating this book, and for your ongoing efforts. I know this book will prove its worth, now, and as time goes on!

Mark Raley – Duke Avery of Kempsford – West
Mr. Porter’s synthesis of formal martial arts and rattan fighting is a system that I have personally observed to train champion after champion across weapons forms. It is also a glorious celebration of the joy of motion. In my opinion, no serious practitioner can afford to be uninformed of these techniques – whether directly employing them (recommended) or facing off against them.

Thomas Taylor – Earl Thomas the Incomplete – Trimaris
Written by one of the most influential pioneers of the sport; this book presents a comprehensive system for both the novice as well as those who have studied the art for decades.
Dave Kelley – Duke Savaric de Porte des Lions – An Tir
Duke Paul’s understanding of the principles of SCA combat is among the best in the Society. I would recommend this book to anyone who is interested in learning about our sport.

Rick Olson – Duke Reinmar Wolfmeier – Artemisia
Training with Paul has always been a mind opening experience for me. After just a few minutes I always fight at a higher level. I am honored to be his student for over 30 years.

Dennis McBroom – Count Denis of the Titans – Atenveldt
“At last! Duke Paul of Bellatrix/Paul Porter has compiled his teachings into a book. Paul is the finest teacher of medieval martial arts that I have ever known. The Bellatrix System is the book for anyone who wants to learn or understand armored combat.”

David Anderson – Viscount Leon von Schrecken – West
I came to Duke Paul’s class twenty years a Western Knight, and a Royal Peer. Three things I learned in Duke Paul’s class: One, my fundamental skills were poor; Two, no one teaches fighting fundamentals better than Duke Paul, Three, that with better fundamentals you can go to the finals of a 40-fighter list, with 8 other Knights, and get to the Finals clean, then win the whole thing. My only regret is that is didn’t take his class earlier in my fighting career. It would have made me a better fighter, and a better fighting teacher.

Mark Hollingshead – Duke Mark D’Arendel – West
Duke Paul/Paul Porter is one of the godfathers of modern medieval armored combat as practiced in the SCA. He was instrumental in developing the techniques, rules and culture of this combat sport. If you are interested in Paul’s techniques, theory, training practices and philosophy, this book is an invaluable resource, and it behooves you to have a copy of this book in your library.

Michael Cramer – Count Valgard Stonecleaver – East
The Bellatrix fighting system is one of the most complete and efficient martial arts systems employed in Medieval armored combat. Long before people began to translate the medieval fecbhtbucher, or fighting books, Paul Porter entered medieval fighting with a background in Judo competitions and a masters eye for the details of combat. Applying the principals of leverage, balance, footwork, and timing used in Judo to recreations of European knightly combat, he created a unique martial arts system that is now used all over the world by armored combatants, using both steel and rattan. This book is essential for anybody who wants to improve their armored fighting skills.

Mark Johnson – Count Berek von Langental – An Tir
Paul of Bellatrix’s training philosophy on mechanics has inspired multiple SCA generations of fighters. Paul’s teaching of form and technique can be seen as SCA heavy fighting has become more refined over the decades. This manual is a required part of any fighter or instructor’s library.

Steven Schroeder – Duke Fabian Arnet von Switzingan – West
It is said that we stand on the shoulders of Giants. In modern sword fighting, those are the shoulders of Paul Porter. Paul’s innovative and battle-proven techniques and mechanics can move your fighting to the next level.

Carter Lucas Cox – Countess Thora Heri – Outlands
Paul understands the physics of movement like no one else I have worked with…and I speak as someone who has competed in multiple sports. He understands how to develop force in ways that are ergonomic for the human body; he also understands how to flow from one sequence to the next in ways that are so kind to muscles and joints that it feels easy. Paul breaks his lessons down for students in a way that anyone can benefit from. I find myself drawing on his lessons when working with other students, and when training on my own.